énergie Group has been recognised as the outstanding performer in UK fitness, awarded Health Club Operator of the year at the ukactive Flame Awards.

The Flame Awards represent the most prestigious accolade in the health, fitness and physical activity sector, with each entrant undergoing a rigorous assessment and evaluation process including audits and customer insight surveys. 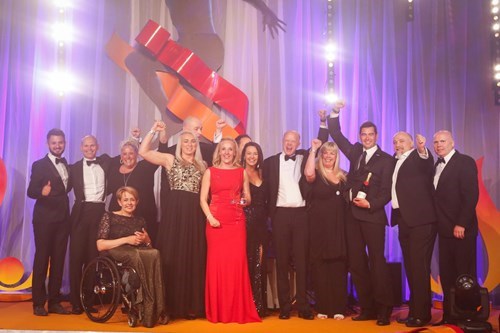 Above: The énergie team collect the award for Health Club Operator of the Year

Around 850 industry representatives attended the awards ceremony held on 29th June, which followed the annual Flame Conference addressed by speakers including Baroness Tanni Grey-Thompson and former All Blacks captain Sean Fitzpatrick. Health Club Operator of the Year is a hotly contested award, and énergie won out over a diverse and competitive field.

After a landmark year in which it smashed its innovative crowd fundraising target, énergie has delivered outstanding results on every front. Delivering sector leading support through its émpower programme, democratising fitness through its all-inclusive approach, énergie straddles different segments of the industry with ease, consistently delivering outstanding customer retention and engagement for members.”

énergie Chairman and CEO Jan Spaticchia comments: “We are absolutely thrilled to have been recognised as Health Club Operator of the Year. The award is testament to the hard work our franchisees and their staff teams put in every day to ensure our members have a fantastic fitness experience and are empowered to achieve the results that matter to them.

The award also reflects the dedication of our Operations and Compliance teams in ensuring that the highest possible standards are upheld throughout the énergie network. I am delighted to see that their hard work has paid off.”

The Health Club Operator of the Year award follows énergie’s successful recent crowdfunding campaign, which closed at 126% of the original target earlier this month, and its inclusion in The Leap 100 2016 – a list of the UK’s fastest growing companies chosen by Michon De Reya and City AM.

Spaticchia adds: “2016 is shaping up to be a landmark year for énergie, with multiple new club openings, an oversubscribed funding round and recognition as one of our industry’s leading performers. We’re looking forward to building on that success as we pursue our ambition of becoming the UK fitness market leader.”